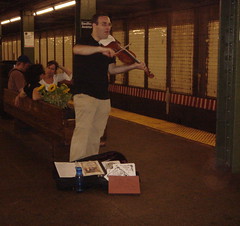 Earlier today, several people forwarded me a lovely story from the Washington Post, about a celebrated violinist performing in DC’s Metro station. The story brought back a heap of memories..

In the summer of 1998, I was a violist with the Spoleto Festival Orchestra in Italy. Amongst the highlights of that summer were performances of Janacek’s “Cunning Little Vixen” and Kurtag’s trio “Homage à R. Sch.”. That summer, I also made my first appearance at an art gallery, improvising to paintings of the painter Caio Gracco (which was televised, and got me a free painting). That summer in Spoleto, I received my finest haircut, which came with the free gift of a metal business-card-holder I use to this day.

Among other notables, Joshua Bell was at Spoleto to perform in a chamber music series with flutist Paula Robison. The members of the orchestra rarely fraternized with him, seeing as he was a “superstar” and probably didn’t want to be bothered. But we did see him frequently in the local ice-cream shop.

As it happens, that summer in Spoleto was the only time in my life when I received a steady paycheck for playing music – it wasn’t much (either $275 or $350, I don’t remember), but it was more than enough to cover meals, travel, and gifts for the way back. Everyone in the orchestra received the same amount, so nobody was jealous of the concertmaster — or the principal flutist — for receiving a premium. Everyone was on equal footing, and everything was fancyfree.

Several weeks later, I returned to New York completely broke, and seeing as my parents were out of town, I decided to play in Central Park to make some money for dinner. But that day, I received great advice from a colleague — “play in the subway! the acoustics are better, and you’ve got a captive audience, at least while they’re waiting.” And he was completely right.

Shortly after I began playing in my local station on the Upper West Side, a photographer took my picture for a book about homeless musicians. When I told her that this was my first time, she was charmed, but took the picture anyhow. (Don’t know if the book was ever published.)

I played Bach at first, but soon switched to improvising and playing showtunes. (For some reason, “Theme from the Godfather” and “Autumn Leaves” always worked best.) At most, I made $15-20/hour. This was 1998…

That summer, I auditioned for a permit under the guise of Music Under New York. The audition — held in one of the great cavernous halls of Grand Central — required a 5-minute performance in front of a jury of train conductors and other MTA personnel. I played two movements of Bach, while a battery of Chinese dancers prepared for their audition on the sidelines, and a singer-songwriter tweaked his amp. I didn’t win.

… in the summer of 2006, I decided to play in the subway again, this time in the East Village and Williamsburg. I wanted to promote my upcoming show at Joe’s Pub, pass out flyers, and maybe sell my debut CD. Inna + I produced a folder with my bio printed up, as well as fresh press clippings from Billboard, NYTimes, and TimeOut. The outcome? — I made about $10/hour, and sold 2-3 CDs each time I played. This time, I played very little Bach, and no showtunes.
Playing in Williamsburg was by far the worst reward — most hipsters are lost in their iPods, and even those who chose to listen were stingy. I didn’t know their repertoire..

It seems that every corner of a central NYC subway station now has live music, probably a testament both to the rising rent prices, and the indie spirit (most artists now have a CD to sell). An act can expect to make a reliable $10-20/hour, and the privilege of signing up new fans / getting new clients / etc.. It sure beats working retail!…

With that in mind, a few tips for anyone who wants to “break into the industry”:
(if you perform in the subway, please chime in with comments!)

— Play either shortly before or directly after rush hour. Nobody will listen/tip during rush hour itself, as the trains come too often. By contrast, people are much more likely to listen when the interval between trains is 5-10 minutes.

— Pick a subway station which is central, but not too central. Stay away from big transfer stations (like Union Square, Grand Central), focus on smaller stations which have a large audience, but where trains move slowly. Highlights: 81st Street – Museum of Natural History; L train at 1st Avenue; Spring Street; Astor Place.

— Play something short, so that someone waiting for a train can catch one entire piece. (Don’t play “Chaconne”, nobody has time for that!)

— Hand out flyers to people standing next to you.

— Sell CDs, have a mailing list signup sheet. Anyone who buys and/or signs is a sincere new fan.

— Enjoy the silence, the lack of applause. In the subway, you are the star and you are nobody. Nothing is more rewarding than being yourself, and being undercover.