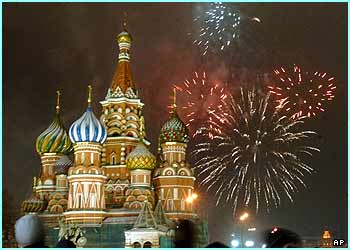 New Year’s is a time for family.
It’s a time for the family to reassert that they are your family, and for you to remember that neither you nor your parents chose each other, but you sure deserve each other. Hopefully the miracle of genetics was helpful enough to provide for a match that will allow you to celebrate your differences without too much arguing. It is also (arguably) the true “Last Supper”, for the very next day everyone goes on a diet.

This being a holiday not beholden to any religious custom, the obligatory “ritual” part is instead filled by – what else? — food and movies. While Americans flock to the movie theater (or the mall), most former Soviet nationals gather ’round the TV for the annual screening of “Ironiya Sud’by ili S Lyokhim Parom” (in English “The Irony of Fate, or Have a Great Bath!”). A classic 3-hour romantic comedy from the 70s, it has brilliant acting, unforgettable scenes, amazing songs and seems to transcend time – though I wonder if it can be understood by Russians who were born outside of the USSR’s grips, or foreigners altogether. Though, truth be told, as American small towns grow to appear more and more identical, and everyone buys furniture at Ikea, the visual concept of the film could be easily translated. But what about all of the fragile rhetoric, the extended Shakespearian monologues, the amazing music? This film is immortal because it is courageous in every step. It’s a masterful satire which makes you laugh, cry, and celebrate the present.

For me, the idea of a New Year’s movie tradition is bothersome – I’d much rather watch something new. But no – family is family. They didn’t chose you, they didn’t chose the movie, or the date of the new year.

We’re all stuck in traditions and families, celebrating and promulgating ideas we didn’t create. Some of these traditions are justified with books (e.g. the Bible etc.), history (Thanksgiving) and randomocity (New Year’s).

How I wish that were different! How great would it be if there was a “create-a-holiday”, where everyone was asked to create something, rather than buying a bottle of wine or baking a cake. Create something new, something personal, even if once a year!

Maybe next time – for now, the jury rests.